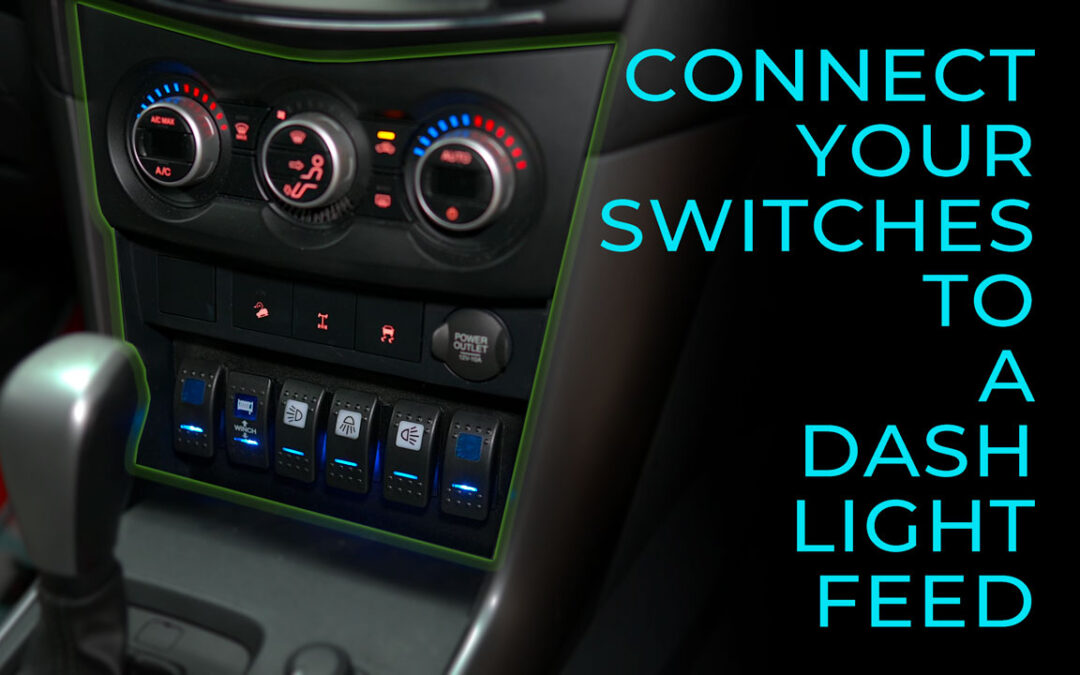 Where to find a dash light feed in a Mazda BT-50?

The style of switches that you add to your car or canopy these days mostly come with some type of illumination, as you can see on the bottom of the 6 switches I added to my centre storage console in the image above.

I added that switch panel as part of my 4WD build, but I needed to know where to find a dash light feed in a Mazda BT-50 or Ford Ranger in order to get those lights to come on when the car’s dash lights came on.

I needed to know where to find a dash light feed in a Mazda BT-50 / Ford Ranger (same car back then) so that the whole job looked more seamless, like it was all meant to be there.

It was also practical for finding the switches in the dark.

Now I will show you where to find a dash light feed in a Mazda BT-50 or Ford Ranger.

Affiliate links are present on this page. Through partnerships with, but not limited to: Amazon, eBay and Commission Factory, I will make a small commission through qualifying purchases. This comes at no extra cost to you and is just a way for me to try and support myself and the blog.  Thank you.

Where to find a dash light feed in other cars?

The things we go through here can be applies for those who want to know where to pick up a dash light feed in almost any car, the basic principle is just finding an existing dash light illumination, then testing for the proper cable.

Otherwise using a workshop manual like I have could help, for me I only used it to verify what I already knew, as I prefer to use a multimeter, but I still check the manual to make sure there’s no hidden secrets.

Why find a dash light feed?

It seems worth the effort to me, the dash lights will come on when the light levels dip to a certain point, the car will detect this and will switch the dash lights on with the headlights (car dependant of course, but modern cars do this).

To have your custom switches come on at the same time is the best way to make the job look nice, but is also practical for finding the switches.

There are times when you wouldn’t do this, like the switches in my canopy for example, there is no need for them to come on when the dash lights come on because they’re not being viewed at that time.

With these scenarios you can create your own switching circuit to power those little “dash light” illuminations.

As I was running cables to the switch panel above the centre storage console, the best place for me to tap into was the switches directly above this spot, which was the traction control, downhill descent control and rear diff lock switches.

So we know where to find a dash light feed in a Mazda BT-50 or Ford Ranger, let’s look at the job more specifically.

The good thing to note here is that dash light illuminations on these 12V rocker switches have such a small power draw that you will probably be fine without a relay, using the feed to directly power your switches illumination circuit.

However if you have other ideas, or a gazillion switches, you can always have the dash light feed powering a relay instead of directly powering the switches illumination.

I actually made use of a relay to switch a negative on the SPDT (two-way) switches in that switch panel due to the different way that they control illumination.

So if you have heaps of stuff to tap into a feed, have relays powering relays.

With older cars it will still have dash lights but they will come on when you switch your headlights on.

Modern cars often won’t turn on your dash lights just because you flick your headlights on.

It requires a combination of having the lights on, but also the ambient light being low enough which the car detects automatically before switching the dash lights.

So you may think you know where to find a dash light feed in a Mazda BT-50 or Ford Ranger, but yet you are getting 0 volts when testing. It is possible you need to move the car into the garage, or test again at dusk/night time.

This is not an exhaustive list of all the locations of the dash light feed, nor is it meant to be. It is just the location that was best for me because of its ease of access and location right near my switch panel.

You can pick up a dash light feed from wherever works for you and your switch locations.

These switches are easy to access. These instructions are for a 2015 BT-50 XTR trim level, but they’re all the same for the most part.

How to find a dash light feed in a Mazda BT-50?

So we know that all of these switches have an illumination, we also know that there is a negative that they will all share.

In the image below you can see the rear diff lock and the traction control share a black cable with a grey stripe, but they also share a brown cable.

Now it is never certain what colours automotive manufacturers will use for different purposes, but generally black will be a negative when given the choice.

Affiliate links are present on this page. Through partnerships with, but not limited to: Amazon, eBay and Commission Factory, I will make a small commission through qualifying purchases. This comes at no extra cost to you and is just a way for me to try and support myself and the blog.  Thank you.

How to prove it

Get a multimeter from Amazon (I personally use a Fluke 117) and test the suspected negative to the chassis. You should get a very low resistance.

You will also have continuity between all of the black cores.

For the active we can check that there is no voltage, then check for continuity between all of the brown cores to make sure they’re all connected in some way.

Then with the battery connected, we can test for voltage as we switch the dash lights on and off, it should jump to around 12 volts, then back, which is exactly what happened when I ran this test on the brown core.

This step is unnecessary (testing for voltage is verification), once we know which cable it is we don’t need to know any more than that, however we can check against a workshop manual to see that the cable does what we think.

You can see from this drawing that we have the rear diff lock, the ESC (traction control) and hill descent control all have a cable labelled BS that goes down to ground, this means black with a grery stripe as per the legend in the bottom left corner.

On the other side they all share a cable core labelled N which means brown, with no stripe.

Now we already know all this because we have tested with a multimeter, but it is nice to get that confirmation and peace of mind before you go cutting into the cables.

So workshop manuals aren’t essential in knowing where to find a dash light feed in a Mazda BT-50 or Ford Ranger but they can help reassure us that we’re on the right track.

Now you know where to find a dash light feed in a Mazda BT-50 or Ford Ranger, just tap into that cable with whatever your preferred method is and run it out to your switch panel, or alternatively run it to some relays.

Either way, hopefully this has been helpful.

How to Hardwire a Reverse Camera || Gator GRV90MKT Hardwiring

END_OF_DOCUMENT_TOKEN_TO_BE_REPLACED

Where to find an ignition feed in a Mazda BT-50?   Have you tried to add some sort of accessory to your car only to realise that you need it to be switched with the accessories? What this means is that it turns off when the car is off, for me this happened when I...

END_OF_DOCUMENT_TOKEN_TO_BE_REPLACED

Can You Run a Compressor From a Lithium Battery? Let’s Find Out!

END_OF_DOCUMENT_TOKEN_TO_BE_REPLACED

Upright Fridges vs Chest Fridges – Which is Better For a Canopy Install?

Which Type of Fridge is Best: Upright Fridges or Chest Fridges?   G'day guys, This post aims to cover some of the main pros and cons of upright fridges vs chest fridges and how they apply to canopy mounting in a 4WD build. This question probably gets asked a lot,...

END_OF_DOCUMENT_TOKEN_TO_BE_REPLACED

What is the Best Dual Zone Chest Fridge?   If you're in the market for a dual zone chest fridge this post may be of some help. It is a pain to be looking back and forth across different websites and tabs to try and compare all of the data, dimensions, costs etc....

END_OF_DOCUMENT_TOKEN_TO_BE_REPLACED

What is the Best Upright Fridge?   If you're in the market for an upright fridge this post may be of some help. It is a pain to be looking back and forth across different websites and tabs to try and compare all of the data, dimensions, costs etc. This upright...

END_OF_DOCUMENT_TOKEN_TO_BE_REPLACED

What Is The Best DCDC Charger, AC Charger and Inverter Combo? Is The Redarc BMS30 Worth The Cost?

What is the Best DCDC Charger, AC charger and Inverter Combo?   That is one question that I knew would be hard to answer when I was planning my 4WD build. I can tell you now that I went with the Redarc BMS1230S3R (affiliate links) and paired it with the Enerdrive...

END_OF_DOCUMENT_TOKEN_TO_BE_REPLACED

Putting a Drain Valve in Your Air box After Installing a Snorkel – Worth Considering!

END_OF_DOCUMENT_TOKEN_TO_BE_REPLACED

Automatic Transmission Temperatures on a Mazda BT-50 / Ford Ranger   G'day guys and girls. In this post we will be discussing how to lower automatic transmission temperatures, the principles and methods can apply to any car, but the products discusses will be for...