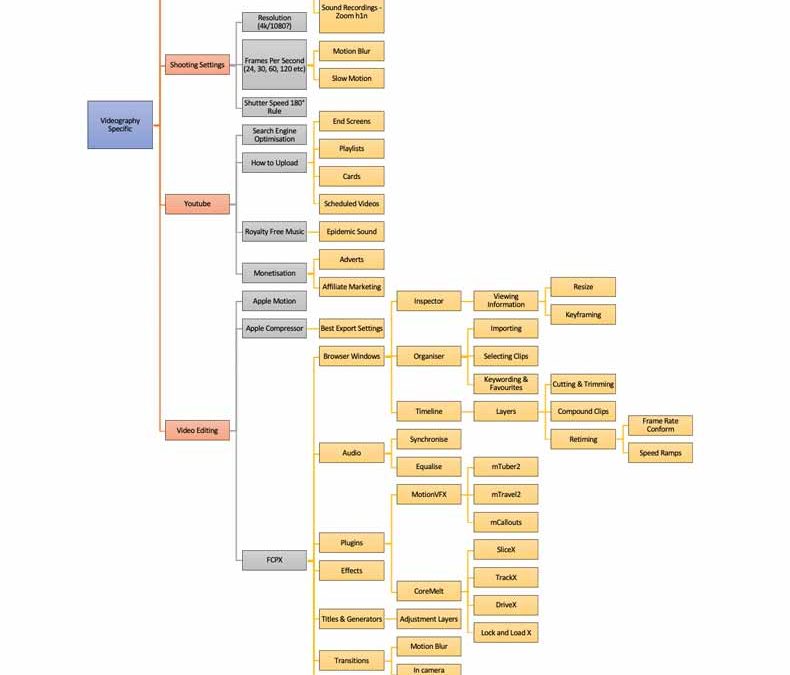 What skills will I find in this skill tree for videography?

This tree is for a specific look at videography skills that aren’t shared with photography. For all the skills, gear and components that are shared between videography and photography see the original post here.

A large part of videography or content creation in general is the editing process. A good edit can fix some pretty questionable footage. On the other hand, bad editing can ruin perfectly good footage.

If you want to take these skills on the road, just know that it isn’t easy to travel and carry the amount of gear required to do some travel vlogging.

See the other skill trees here!

This was originally all going to be covered in one post but it became far too unresponsive due to its massive size! So I split it into 4 separate posts instead.

The benefit of course being better load times for you, and a chance for me to briefly explain each tree.

See the other posts here;

A quick Explanation of the skill tree for videography

You’ve probably noticed how large a portion of the tree is dedicated to the editing side of creating videos. Just know that I haven’t even brushed the surface of video editing with this tree. It’s involved, it runs deep, it’s great fun to play around with.

It is such a large subject I actually really struggled to find a good enough way to even categorise everything so that I could cover as many aspects as possible without going into even more layers of detail. I think if you enjoy creating or shooting videos that you will really enjoy the process of editing.

It’s hard to get your head around not only the endless possibilities in which your video can go, but also the crazy amount of ways you can get it there by using the premium editing programs such as: Final Cut Pro, Adobe Premiere Pro or Da Vinci Resolve.

I personally edit with FCPX due to its one time payment as well as its integration with their own hardware. I wouldn’t say any are better than the others though, I am used to and happy with FCPX but all options are great, despte the fan boys who like to try and peg competitors software down a notch.

Learn them. Imagine the end result of being able to change your viewer windows, cut footage, scroll through footage, apply a colour correction and more all without reaching for the mouse or trackpad!

Trust me it takes time. Then you have a period where you don’t edit for a while and maybe you have to look up a shortcut again but just do it, enough repetition and it will stick, trust me. I have spent hours learning them, I still forget them but each time it comes back quicker and quicker.

This isn’t a skill you will learn by watching videos, unless you’re following along as you go. I think this is the most valuable skill in the skill tree for videography and that’s why it is in capital letter and bolded.

All the other skills you don’t normally think of

Unfortunately it’s not all fun and games when you’re starting out. Things like uploading to Youtube bring with them a whole new set of challenges and things to learn. I did some practice uploads with private videos to get my head around the Youtube studio.

There’s default settings to be set, different codecs that can be applied to your videos, royalty free music to explore, a range of export settings and other stuff that you often don’t consider when you’re starting out.

I signed up for Blackbox as well, which is a stock footage aggregator that acts as a middle man for you to try sell stock footage to places like Adobe Stock and Shutterstock. Yet another thing to learn. 5 emails and many documents to read to make sure you comply with their expectations of you, as well as to give you the best chance of successfully selling your footage.

Don’t forget the art of keywording. This applies for Blackbox, Youtube and even for yourself in your editing program to help find your own footage for selection in your projects. The point is, you can be fully consumed with things you never even considered when you thought of trying to be a content creator, very little of it is glamorous.

Then when you think you’re getting good at editing you get some powerful software like those offered from CoreMelt and realise you know nothing Jon Snow! It’s still a ball to experiment and learn about all of these things though and I wouldn’t have it any other way.

How do I learn these skills?

These posts go into further detail about why I like each channel as well as showing 3 example videos from each channel for your viewing. However if you want a quick rundown, or my favourite choice from each I’ll briefly explain who and why.

Ben Halsall – My pick of the bunch from the post. His content is up to date, varied, covers all editing programs and is very well explained.

He’s got a big catalogue to look through and there’s something in there for all but the very best of users, but then why would they even be looking at a post like this?

Peter Lindgren – This guy is a relative newcomer who has blown up during 2019, skyrocketing from 30k to over 150k subscribers. Why?

Because he’s genuine, he shows behind the scenes action, he’s not into himself and has videos have some really really good hints and tips from someone who is learning his craft as he goes.

One quick tip before I go

Make sure you learn all about frames per second. You have to shoot your video in the correct frame rates out of the camera especially if you plan on editing on a 24fps timeline.

When using 24fps you can’t smoothly put in footage shot at 30fps or 60fps without making it slow motion and using every available frame.

Learn about frame rates, think about what shot you want to have in the final product and shoot accordingly.